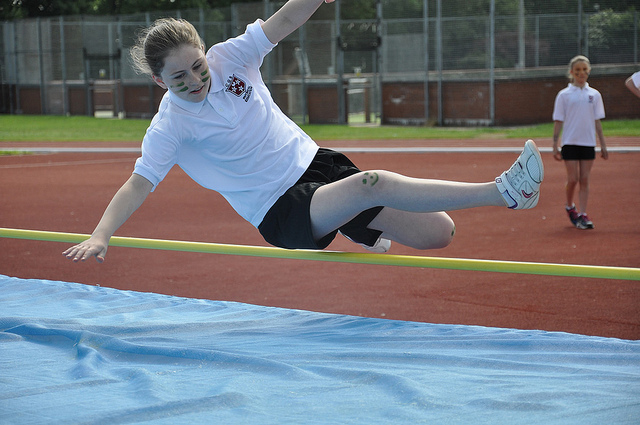 The sun shone brightly on King George V stadium in Grimsby last Thursday for long sections of our Sports Day. This was a welcome change after last year’s rain. Every activity could be completed to time and one of the features of the day was how excellently it was organised by Mr Andy Shutes, Head of PE and the PE department. I am very grateful to all my colleagues, though, for playing their part in ensuring that everything ran so smoothly. This includes Dr Derek Carr, firing the starting gun, Mrs Anna Sharp and Mrs Ailsa Wish for running the First Aid tent, Mr Terry McTernan being a most mellifluous announcer and Mr Michael Robinson being a superb statistician. We are also grateful to our track judges and recorders, whose precision enabled us to know that many school records had been broken. Thanks go to the Friends of Caistor Grammar School for providing free refreshments to our students, which was very much appreciated. We are grateful too to all the staff at King George V stadium. My biggest praise, however, needs to go to the Sixth Form House officials (ably supported by our Heads of House Mr Steve Markham – Ayscough, Mrs Louise Triggs – Hansard, and Mrs Fiona Cooke – Rawlinson) who did a fantastic job in organising their House teams (with support from their year group House officials) and who created a carnival atmosphere of fun, vibrant colour and serious competition. The day was lit up by many individual performances which delighted the very attentive and supportive audience. In the end it was clearly Rawlinson’s day. In the boys’ competitions, they triumphed with Ayscough 2nd and Hansard 3rd. The same was mirrored in the girls’ competition and is also the overall ranking. This is the third year running that Rawlinson have won Sports Day after 9 years of Hansard domination. Ayscough are strengthening their position however, having won both gender categories of the Year 7 and the Year 9 competitions. Perhaps next year it will be their year.

Thursday’s Sports Day followed hot on the heels of the Superzone Inter School athletics competition on Tuesday at the same venue. Ideally, of course, we would have liked to have had the events in reverse order as some schools did have, but in the event our team responded magnificently to the challenge. We were the defending champions. Indeed, we are the only school ever to have won the competition over the previous four years of it taking place. We did not start particularly well and in many of the early events we were not even placed. However, shortly after my arrival (and you might judge that I deemed this to have been a significant factor in the reversal of fortune!) we began to do very much better. By the time lunch had arrived, we seemed to be always mentioned in 1st, 2nd or 3rd. Given that there were 14 schools competing in two divisions, this was pretty impressive. At the end of the day, it transpired that our boys had done particularly well, winning in Year 7 and in Year 10 and being joint winners in Year 9 with our girls also winning in Year 10. Put together, we were comfortably Superzone champions for the fifth year running and (like Brazil in 1970) we will get to keep a tremendous cup to mark this distinction (even if we have to pay for it ourselves!).

Last weekend, 61 Year 7 students and 9 members of staff travelled to Newlands near Keswick in the Lake District for a really wonderful weekend of outdoor activities. The weather, by Lakeland standards, was kind to us but the midges were in less forgiving mood. This, however, did not dent our enthusiasm. We gamely kayaked, canoed, climbed, abseiled, ghyll scrambled (this is a particularly special feature of the trip) and walked over local fells, as well as playing lots of team challenging games. The spirit on the trip was superb and I am enormously grateful to my colleagues for giving up their weekend and throwing themselves so wholeheartedly (and literally) into the deep waters of the experience. Our Year 7 students were superb and the centre praised them highly for their commitment and positive spirit. I was very proud of them.

I am hugely proud of everyone associated with “Caistor Focus”, our School newspaper, which, at an awards ceremony in London, was awarded the Shine School Newspaper of the Year Award for the second year running. This is a fitting tribute to all the work done over 20 years by Mrs Jacky Robson, as founding Editor. I am also very grateful for the work done by Mr Tony Pearson and also all of our budding student journalists. We have recently produced a Summer 2013 edition and this will be distributed to you before the end of Term.

I, myself, was also in London recently attending a reception at the House of Lords for the 50 Head Teacher Ambassadors for Sport (created by the Youth Sport Trust) and hosted by the Chair of UK Sport, Baroness Sue Campbell, who is to visit us in September to open our new Olympic Torch Building on Monday September 16th. I had the delight of speaking to Duncan Goodhew for quite some time about our School. He has a special interest in it as he nominated ex-Head Boy, Jordan Duckitt, to light the Olympic Cauldron. He has indicated an interest in visiting us at some point in the future.

I feel very let down by a few parents who have organised for their Lower Sixth daughters to go on what I consider to be completely inappropriate holidays. This is all the more galling because it has happened in such close proximity to the yawning entrance of a six week summer holiday. I understand that some of you might consider that at a School where so much activity and adventure happens – and this letter has more than its fair share of non-lesson activity – it might be argued “what does it matter if we take our children on holiday and have a bit of fun of our own in term time at cheaper cost?” I am afraid that the both the Government and I take a different view on this. We, at CGS, want your children to have the broadest possible education. The best education indeed that money can’t buy. That isn’t just achieved by outstanding lessons in the classroom. We are learning lessons for living together and being citizens when we go on the Year 7 Residential for example. Our exam results suggest that we get a very good balance between time in the classroom and time beyond it so I am not at all apologetic for the programme that we organise at this school. Indeed, I am proud of it! If your child misses school they are missing a unique learning opportunity which might not come again. Often this year when parents have removed their students from school (and it doesn’t happen very often I should add) I have heard tales of students being anxious and upset that they will be falling behind their classmates. Quite so.

The law on attendance is changing in September with the Government significantly strengthening the regulations, making it impossible for Head Teachers to approve all but the most essential holidays in term time. Recently I have approved a holiday for a farming family whom could not make their one family holiday of the year during the summer holidays because of their occupation. However, I will not authorise a holiday planned for just before the end of term because the prices are cheaper. The Government encourages schools (where they are academies) and Local Authorities (where they are community schools) to fine parents and I will be recommending this policy to the Governing Body in the very near future. In September we will be launching a new policy on attendance which will make our expectations as a School extremely clear. This policy will be in line with that agreed by several other local primary and secondary schools. We are standing together with them in signalling to parents our absolute intention to limit, as far as possible, all absence from School. Our term dates for the 2013/14 academic year have been on our website for some time and can be accessed there readily.

We know that high achievement is reached only by sustained hard work, effective focus and considerable sacrifice. We defer other pleasures to make sure we get the job done at school. Parents have a key part to play in this process and the simple truth is that you are not playing your part if you take your child out of school in term time. As a School, we believe in being the best we can be. We all have our part to play in achieving this.

The Friends of Caistor Grammar School need you

The Friends of Caistor Grammar School has reached a generational turning point with the children of many of our current committee leaving the School this summer. This opens the door to a new set of parents whom we need to step forward and make the Friends of Caistor Grammar School your own. If you would be prepared to play a role on the committee next year, please can you contact either the current secretary, Mrs Katherine Jago, at school or email Katherine.jago [at] caistorgrammar.com or my secretary, Mrs Deborah Craddock, email deborah.craddock [at] caistorgrammar.com

I will be writing to you next week to celebrate the achievements of four members of staff who are retiring at the end of this Term. Between them, they have nearly 100 years of service to CGS. I am conscious that Year 10 students will be on work experience next week and I want to give everyone in our School community notice that they should seek out and thank these colleagues for their tremendous contribution to CGS over the years. Those retiring at the end of this term are: Mrs Sharon Woodhouse, our Finance Manager, Mrs Jacky Robson, Head of Careers and second in the English Department, Mrs Pat Osborne, lately Head of French and before that Head of German and Languages Co-ordinator, and Mr Alan Saxton our School Librarian.