Sweeney Todd: The Blood, the Sweat, the Tears… and the Thanks 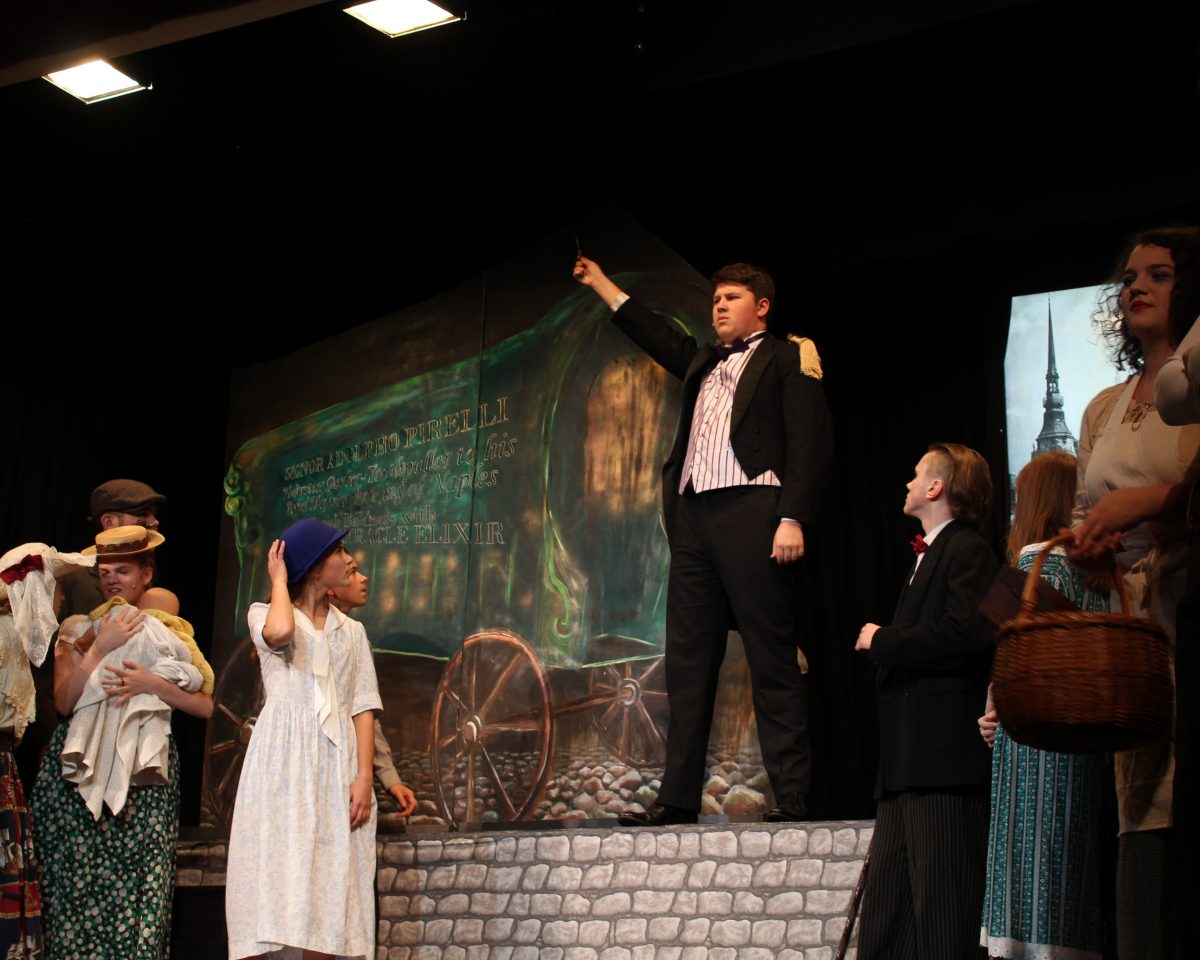 It was the production that had been waiting in the wings year after year, glowering at us ominously, malevolently even, challenging us to take it on and finally, this year, we had the team to do it justice – and what a team they were! Now that the last pie has been eaten, the blood has (mostly) been cleaned away and the world of Sweeney, Mrs Lovett, Judge Turpin, Beadle Bamford, Anthony, Johanna and, of course, Pirelli and Toby has faded like a distant memory, it seems fitting to say a few ‘thank you’s to those who made this exceptional production such a memorable event for all involved.

Whilst there was a conscious effort made this year to scale back on props, there were some that we knew we couldn’t do without and which we knew would be difficult to source. We had obviously reckoned without our D&T dream team of Mr Birch and Mr Donington, who seemed to be engaged in a battle of one-upmanship to create the most authentic props they could – their competitive spirit was our gain and we look forward to setting them similar challenges next year!

Of course, even the most impressive props need a stage to go on and here our sincere thanks must go to Linden Jago. Despite leaving CGS 9 years ago, Linden continues to be a huge supporter of the school, and his technical expertise, know-how and dedication to drama at Caistor Grammar cannot be overstated. Linden has given up many hours of his time and charmed theatres across the country into loaning staging, lighting and props and this production, like so many before it, was all the richer for his efforts.

Once againthis year our technical team and those students working behind the scenes excelled themselves and, once again, the measure of their work is in their invisibility. It is their skill with lighting, sound, make up and stage management which gives an air of professionalism to any production, perhaps this more than most. I am sure I cannot be the only one to have heard the audible gasp as Sweeney met his grisly end each night, or to have seen the tightening of knuckles as the lighting deepened to a blood red when Judge Turpin visited Sweeney for his memorably close shave. Whilst it is all too easy too overlook these tiny details, some of which will only ever have been seen by the cast, it is the fact that they are there that makes each member of the cast feel like stars.

Parents help these productions in so many ways: from rearranging family activities to work around a punishing rehearsal schedule, to acting as a Sunday taxi service to and from school for the last six weeks. There are some parents, however, whose efforts go above and beyond. Eve Holman and Elaine Hughes have both been staunch supporters of Caistor Grammar productions for several years now, and yet they are both – without fail – among the first to ask the question “What are we doing next year?” Their unceasing work providing costumes, props and running repairs throughout the production are invaluable and we are in their debt. And no, we can’t tell you yet what we’re doing next year!

Of all the students and staff that supported this production, it is Mrs Shilling and Mrs Porter in the Art department who had to field perhaps the most bizarre requests: they maintained their unflappable calm and a smile whether they were being asked for a dead body, mouldy pies or body parts to be put through a mincer. Thank you to you both.

In a play so awash with blood, it is the students who gave their talents, whether acting on stage, singing in the chorus, or performing in the orchestra who were the lifeblood of this show. This year, perhaps more than ever before, it would seem wrong to draw any division between cast, chorus and orchestra as all three had to stretch so far beyond what they thought they were capable of to do Sondheim’s fiendish score – both vocal and orchestral – justice. I do however feel that a few apologies are due to those who either found themselves singing isolated parts of the score at the most inopportune moments, much to the bemused looks of those listening in (“Swee-ee-ee-ee-ee-ee-eeney” anyone?), or to the orchestra, whose stoicism as I asked them to play some of the more challenging pieces “just one more time” so we could run through the staging, was stretched to the limit. There is really no other group of people I would have trusted this show to more.

There was an additional beating heart added to the music department this year in the form of Miss Craven and, like so many of the staff involved, she was unstintingly generous with her time and enthusiasm, not just for this show (although as a devotee of Sondheim this was more than evident) but also in her drive to make sure every student stepped on the stage ready to give their best and perform to he very highest standard. We are lucky to have her.

Lastly, thanks are due to the three people who have, for the last 6 weeks and beyond, had their lives consumed by that Demon Barber of Fleet Street: Mr Robinson, Mrs Jago and Mrs Thompson. All three are driven by a belief in our students and the impact involvement in drama can have – in whatever capacity – and all three strive to reach the very highest standards of professionalism in every aspect of a performance. If you at any point found yourself watching this year’s show in awe at the quality of production being staged by students, many of whom performed whilst balancing the not inconsiderable demands of GCSEs and A-levels, it is due to Mr Robinson, Mrs Jago and Mrs Thompson. Thank you to all three of them.

To everyone involved in any capacity with this play, thank you so much: you all brought the world of the murderous Sweeney and Mrs Lovett to life in ways that I could only have hoped for. The blood may have been stage, but the sweat and the tears were all genuine. Thank you, and see you next year.

To see more pictures from this year’s production and rehearsals, please visit our Flickr page here.