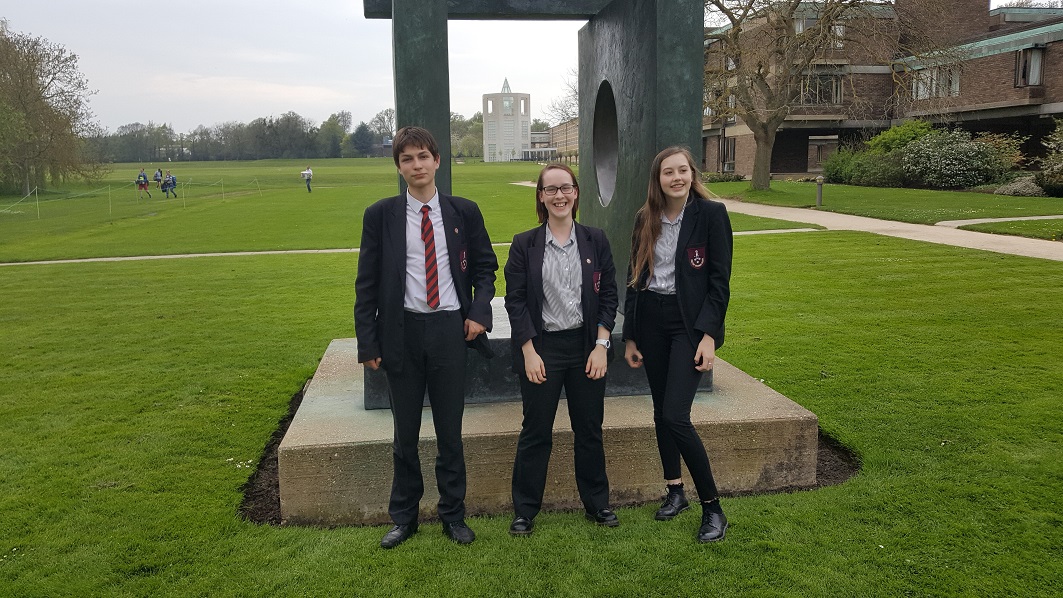 On Saturday 21st April the CGS Year 11 public speaking attended the final of the ESU School’s Public Speaking competition – an unprecedented experience for Caistor as we have come close, but never managed to pass the regional finals! The team on the day down at Churchill College, Cambridge consisted of: Jyothi Cross (main speaker), Tegan Hinch (chair) and Toby Hibbert (questioner) – having adapted slightly from the original Lincolnshire team as we had to say goodbye to our original questioner, Henry Montgomery after the Beast from the East caused a change of date for the regionals!

The Lincolnshire event took place at the University of Lincoln, against local schools where Tegan Hinch won best chairperson and Jyothi Cross won best main speaker with her topic ‘What can we do to help the poorest children in the world’. At the Regional final the competition became tougher, as it was made up of the winners of three other branch finals around Leeds, Lincolnshire and Tyneside. Due to rescheduling from the Beast from the East. Henry Montgomery could no longer compete and Toby Hibbert had to take his place. He did an excellent job in his own right! The event took place at Leeds Grammar, an impressive private school in Leeds where the competition was tense but we beat the other 4 schools to reach the national final! This time, Jyothi did a speech on ‘the Queen should have to invite a world leader for a state visit, no matter what their politics and beliefs’ whilst Tegan and Toby chaired and questioned a speech on whether the best option for higher education is simply going to university.

At Cambridge, Jyothi worked alongside the winning team (St Philip Howard Catholic High School) and spoke on the topic ‘We should measure a nation’s wellbeing in happiness over GDP’ which provided an interesting conversation and was (like all the other speeches) thoroughly enjoyed by the audience. Meanwhile, Toby and Tegan had to work together chairing and supporting their teammate who spoke about the necessity of youth rebellions.

Our previous incredible success continued even on that day, as the team placed 2nd out of the 8 schools that attended the final – that’s 2nd out of 400 schools in total!

We would like to give massive thanks to our supporters on the day and during the three month competition: Mr Robinson, Dr Wilton, all our parents (and grandparents and siblings!) and most of all Mr McTernan, who put the team together and supporrted us no end.

Caistor Grammar now had a Lincolnshire win, a North East region win, and a second in the national final! Wooh!

Jyothi, Toby and Tegan (And Henry)