The “Ever to Excel”, once again, Letter 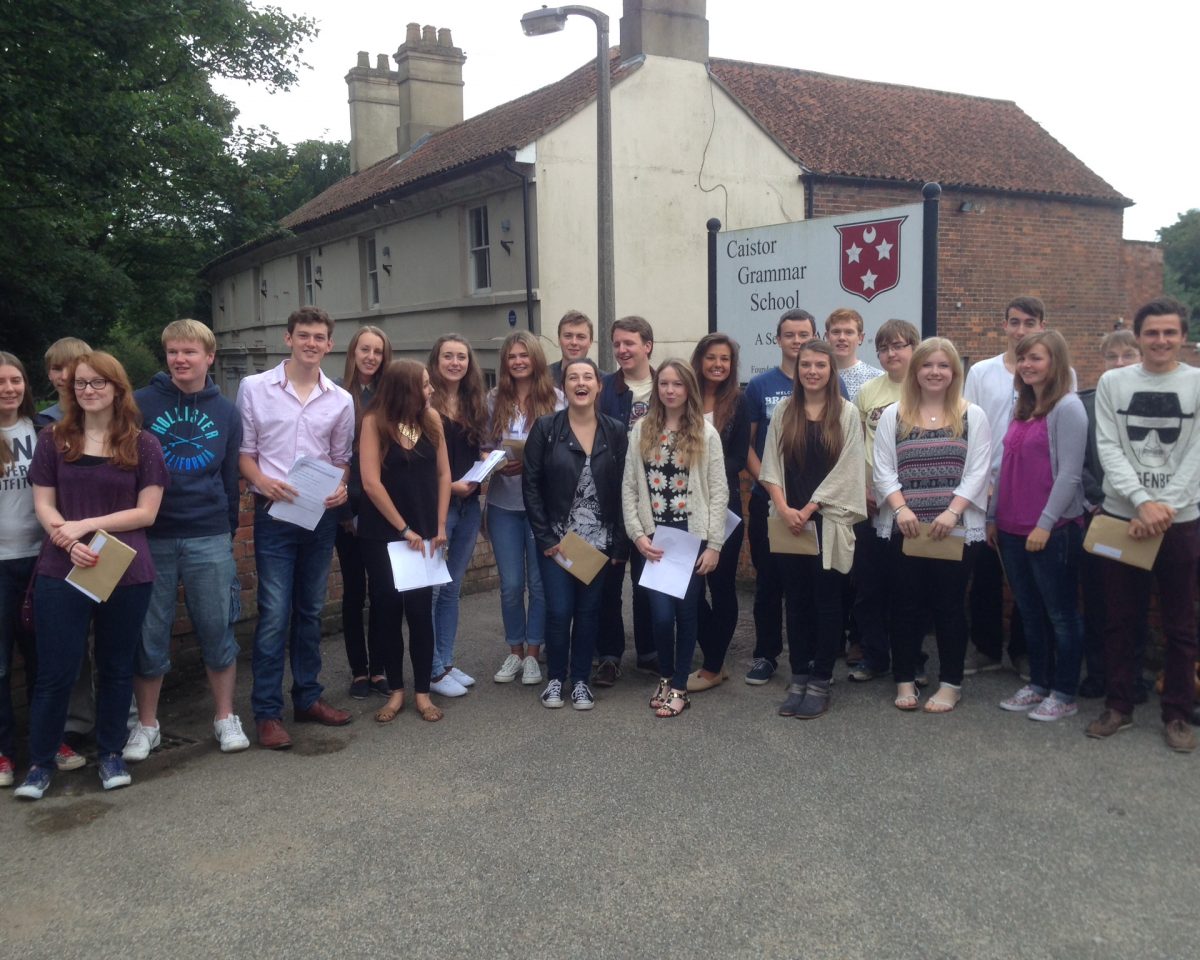 CGS “Ever to Excel”, once again

The Government Performance Tables at both GCSE and A level provide plenty of good news for all connected to Caistor Grammar School.  At A level, CGS is the leading school in Lincolnshire for the 12th year in a row, with an average point score per candidate of 1096.9.  This score places us as the 21st highest ranking state school in the country and the 30th ranking school among all institutions, including independent schools.  That’s right, only 9 independent schools in the entire country gained a higher average point score per candidate at A level than we did.  At average point score per entry, CGS’s total of 242.0 was also the leading score in Lincolnshire.

The average grade for our A level students according to the tables was a “B”.  This doesn’t sound so good until you realise that no other state school in Lincolnshire has been awarded a straight grade B.  Our Value Added score of 0.17 is the third highest Value Added score in Lincolnshire and is especially commendable given the very high entry point (GCSE scores) achieved by our students.  CGS also has the highest proportion of students gaining “grades AAB or higher in at least two facilitating subjects” in Lincolnshire with 43%.  When studying the Post 16 tables, I would particularly encourage all to look very carefully at the column “average point score per candidate” since the gaps are huge between the performance of most schools and ourselves: our domination of Lincolnshire really is of the “country mile” quality!

At GCSE, Caistor Grammar School has also had an exceptional year.  Once again, we have achieved 100% 5A*-C (this for the 14th year out of the last 17 years!!)  We lead Lincolnshire with 99% achieving 5A*-C including English and Maths (we are the only school to achieve 99% and no school in Lincolnshire achieved 100%.  To illustrate just how difficult this was to achieve this year, the county in England with the most number of grammar schools is Kent and only one of Kent’s nearly 40 grammar schools achieved 100% on this indicator.)  We are also the equal highest ranking school in Lincolnshire in terms of A*-C in English and Maths with a score of 99%.

Our average point score per candidate was 582.7 and this is the second highest in Lincolnshire but the Government is more interested in a capped (Best 8) average point score.  Ours was 418.3 and this is the best in Lincolnshire, once again!  The Government’s new chief measure of School performance is to be a Value Added score based on the Best 8 GCSEs, including English and Maths.  Our Value Added score of 1033.1 was the second best of all schools in Lincolnshire of whatever type and one of the highest in the country.

Our overall Government grade for GCSEs is a Grade A and we are one of only two schools in Lincolnshire to receive this top grade.  Our score for the English Baccalaureate at GCSE was 85%.  This is equal top in Lincolnshire with one other school and it leads to us being ranked as the 48th highest state school in the country and the 52nd highest among all schools in the country for the EBacc.  That’s right, only 4 independent schools scored higher than us on the EBacc.

In terms of attendance, our figure of 3.5% is the equal best with one other school in Lincolnshire and is the 75th highest in the whole country out of 6260 listed in the Performance Tables!

The Tables in full can be viewed by going to education.gov.uk and following the links to the Performance Tables.  Once there, the best way forward is to click on the Local Authorities list and to choose “Lincolnshire”.  Happy searching!  They reveal much.

Coping with the snow

We have had to endure very difficult weather conditions in the last few days.  I am delighted, however, that we have been able to stay open for every day of this School year, as I write.  I am extremely grateful to the dedication and expertise of our Site Management Team and, in particular, our Site Manager, Mr Rick Broddle, and his Deputy, Mr Luke Cumberland.  Every morning during this bad spell, they have started work extremely early to clear the snow and the ice to ensure that the paths around the School are safe.  We simply could not be open and educate your children without their commitment.  I am grateful, too, to all of my colleagues and to all those parents and students who have coped with the difficult conditions to ensure that learning at Caistor Grammar School continues unhindered.  Finally, I would like to pay tribute to Mr Trevor Grayson who gets up very early on bad weather days to check that his coaches will be able to bring students safely to school.  We are extremely grateful for this.

Should we need to close, we have now established new arrangements which will mean in future that any snow day at Caistor Grammar School can be a work at home day.  By 10am, probably earlier, on the day of a closure, work for every class in the School will be available to access on our School website.  Each teacher’s work for the day will be included in a single email.  Therefore, if you know you are to be taught by four teachers, you simply click on those four emails and find the work they have set for your class.  Then you get on with it at home as best you can and bring it into school the next day that we are open.  I am expecting all my colleagues to set work for all their classes and I expect all students to complete it.  “We were having too much fun playing snowballs” is not a valid excuse for failing to carry out this work!

The use and mis-use of social media and bad language

Sadly we had a recent case when a student at the School decided to mis-use his Twitter account to make a highly offensive tweet about our School.  I have made clear many times in the past that such behaviour would lead to a severe punishment.  Further there is a School policy that has been drawn up by the School Council on these issues which supports my strong stance.  The student in question was suspended for one day.  I have spoken to all students about this and re-iterated the need for them to be responsible towards each other, and the School, when they are using social media.  We provide all students in the School with annual updates and information on using the internet and we are grateful to the local Police for helping us with this.  Attached is some useful guidance on this matter.

I am afraid that there is far too much swearing in our modern society and many children grow up believing that using strong swear words is perfectly normal.  I have recently spoken to students, too, about the need to be restrained and respectful in their use of language.  The words we use towards one another matter.  They matter especially to young people.  It concerns me greatly when one person’s joke ends up leading to another student feeling despair.  I am particularly concerned about racist language, sexist language and homophobic language.  In particular, the mis-use of the word “gay”, as an insult, is entirely unacceptable at Caistor Grammar School.  I have also suspended a student this week for his inappropriate use of language as well as for inappropriate violence.  I hope that you will help your children to be responsible in these areas.

Once again in the next fortnight, CGS students will be travelling to many parts of the world.  Our very successful ski trip is once again going to Bardonecchia in Italy.  There will be 67 students travelling.  Mr Michael Robinson will be leading the party.  Mr Andy Hay, Head of RE, is leading a trip to Auschwitz, Poland, with 19 students.  Mr Nick Robinson and Mr Ed Cook are leading another geography trip to Morocco and they are taking 42 students on this trip.  A little later in the term, Mrs Briony McNeilly will be leading an English trip to World War 1 Battlefields once again, with 18 students.  We will also be hosting our German friends on the first leg of our German Exchange at the end of this term, organised by Dr Dan Wilton.  I am extremely grateful to all my colleagues who give up their time and take on extra responsibilities to enable such residential foreign trips to occur.  They are a delightful hallmark of our School and they add immeasurably to the learning and the quality of the relationships within the School, but they could not happen without the goodwill and extra work of those staff who take part.  Thanks to them all!

Some outstanding performances from Year 11 students

Congratulations to Emily Brown (11Y) who was successful in her recent application to be on the UK Youth Council for Scouting.  It is a new Council brought in by the first ever Youth Commissioner, Hannah Kentish, and consists of only 120 14 to 25 year olds from cross the UK.  The Council will discuss how we can shape the future of scouting for young people and Emily will travel to London in February for the first meeting.

Congratulations also to Charles Hewis (12AJH) who has won a 2nd prize in the Mathematics Challenge 2014 of the University of Lincoln School of Mathematics and Physics.

Our assembly theme this half term is “Beauty is truth, truth is beauty” and I really feel it has made an impact on our School community.  As we learn at School and grow up, we need to face the truth about ourselves, where we are now and what we need to do to become the person we want to be.  Facing that truth, looking it in the eye, and then responding to it honestly, is one of the hardest things for any of us to do, but this is particularly the case for a young person growing up.  I am very pleased that so many CGS students seem to be making great strides in this important process.