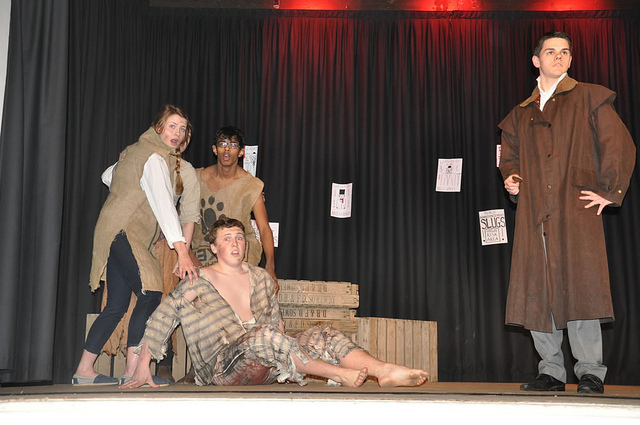 Last week saw the performances of our Junior and Senior House Plays and the public performance of all three Junior plays and the winning Senior play. All three occasions were thoroughly enjoyable and show-cased work of a very high standard. It seems to me that every House was a winner in the competition by producing three plays that were very worthy of performance and very much enjoyed by their audiences. But in the competition, (thanks go to our adjudicators, Mr Andy Dodds, Mrs Pat Dodds and Mrs Carol Milson from Walesby Players for their support) the Junior results were: 1st Hansard for Snow White, 2nd Rawlinson for Winnie the Pooh, 3rd Ayscough for Willie Wonka and the Chocolate Factory. In the Seniors, the winners were Ayscough for Oliver Twit, 2nd Hansard for Old Harry’s Game and 3rd Rawlinson for Lambs to the Slaughter. I am very grateful for the role played by Mr Rob Harris, who acted as our co-ordinator and thanks also go to our House Heads, Mr Steven Markham for Ayscough, Mrs Louise Triggs for Hansard and Mrs Fiona Cooke for Rawlinson. We are also grateful to Mr Ed Cook, Deputy Head, for his overseeing of all aspects of the House system but I would particularly like to praise the students who directed and produced the plays. They did a marvellous job and I think that the students who were in their plays are very grateful to them for their efforts.

The results of the Student Questionnaire

Attached to this letter are the results of the 2013 year Student Questionnaire and on the back is a comparator from the previous year. These results have been discussed at the School Council, by the Senior Leadership Team and also at a Full Governors’ meeting and are taken very seriously. What is most striking when the two years are compared, is how similar the results are. The APS column is an average point score based on a score of: 1. for strongly agree, 2. for tend to agree, 3. for tend to disagree and 4. for disagree and the overall APS is 1.72 for this year, exactly the same as it was last year. The agree total is also incredibly close in overall terms year on year. You should note that when this is calculated, the don’t knows are excluded. Students have been encouraged to write comments and these are also carefully looked at. I think in overall terms, we can be very pleased that the overall message is such a positive one and that that view is so settled that it is repeated year after year. This should not make us complacent and the School Council works hard to recommend improvements. I am grateful to them for their service to the School.

Some recent events to celebrate

Last week we held our annual technology exhibition of Key Stage 3, GCSE, AS and A2 work in the Old Hall. The design of the exhibition itself was very impressive right down to its royal motif, heralding a royal birth in 2013. The standard of the work was really excellent. We were visited by a Lincolnshire Inspector of Technology who was extremely impressed by what he saw. Great credit goes to all the students involved as well as to Head of Design and Technology, Mr Graham Dobson, Technology teacher, Mrs Louise Triggs and Technology Technician, Mr Paul Hutson.

We also had a very successful Friends’ Quiz night recently and we are very grateful to the Friends for organising this and to Mr David Bradbury for once again supplying the questions on a very enjoyable evening, and to Mrs Emma Kaye and Mrs Anne Mackenzie for preparing the supper.

The English Department have recently held their World War 1 Battle Fields trip and we thank Mrs Briony McNeilly for organising this with support from Mr Rob Harris, Mrs Jacky Robson and Mr Tony Robson. I think the Lower Sixth students involved will have got a lot from this. Two of our students in the Sixth Form are also visiting Auschwitz this week as part of an RE project. Daniel Kent and Jordan Spence will, I am sure, benefit greatly from this visit.

Our Maths Department has had a great deal of success with recent challenges and teams. You have already heard how our Sixth Form team reached the national final earlier in the year and now a Year 9 team and a Year 10 team have also been successful. Both of them came second out of many schools in their respective competitions. The teams consisted of: Year 8 and 9 Daniel Jackson, Sarah Clark, Saskia Garner and Olivia West. Year 10 Dylan Moss, Ben Tuckley, Matthew Travis, Charlie Hewis. Well done to the 87 students in Years 9, 10 and 11 who took the Intermediate Maths Challenge. The results are as follows:

We congratulate members of our under 16 netball team who have reached not one, but two, national finals in recent weeks. The team consists of: Eleanor Brook, Rosie Tate, Nadina Green, Olivia Sowerby, Isabella Chase, Harriet Haswell, Pollyanna Seamer, Kate Pattison. Well done also to Mrs Athanasia Ellerby for coaching the team to such success.

Notes on the Pupil Premium

The Government has devised the Pupil Premium as an extra sum of money for students who are disadvantaged. We receive a relatively small grant of money from this fund (just over £6000). We have used this money (and a great deal of other school money) to significantly raise the amount of support we provide to students from Learning Support Advisors. We now have two such members of staff, Mrs Deborah Stones is working with our Sixth Formers and Mrs Gill Cook is working with students in Years 7 – 11. They provide individual students with a good deal of support and advice and are able to monitor their progress very effectively. We think this support will be of great benefit to a large number of our students.

I am now in a position to share with you a policy which has been agreed by the Governors and also on the instruction of the School Council on this challenging issue. I hope you will find it helpful. With very best wishes